Showing posts from March, 2015
Show all

This past weekend, I was privileged to be able to visit my family. One of the highlights of my weekend was photographing my brother Tim, who is a senior in high school. My interest in photography blossomed when I myself was a high school student, when I made the decision to save my hard-earned money to buy a Nikon digital slr. Far from a simple recording of people and events, photography, for me, has always been about the art of capturing the underlying heart of my subjects. Relationship is the core of my best work, and my photography I aim to be an extension of peoples' life stories. For Tim's shoot, the heritage site of my hometown was a great setting for our goals, and I got some very satisfying shots. Tim is the entertainer of our family. As a child, he would always strive to make us laugh, and his antics often resulted in hilarious mayhem. (Click the link below if you don't believe me...or if you need a laugh.) https://www.youtube.com/watch?v=8e
Post a Comment
Read more 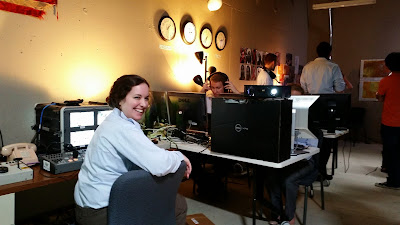 Last weekend, my husband Walker and I became officers in the United States Navy. We were plunged into the tense world of David, a film that Walker's good friend (and cinematography major) Joel is in the process of making. I played a drone communications and missile officer, while Walker played a technical analyst. Along with us played several other volunteer actors and actresses as naval officers. We were involved in a battle scene, riddled with action and emotion, that tested the limits of our incredibly limited skills as actors. The set was a large store closet made into a bunker, complete with a (tattered) American flag, time zone clocks, the targets' faces taped to the wall, some purposefully placed lights, and a TON of high-tech equipment. Grace was given the role of video-feed monitor and projector protector, which meant that she kept people (amidst the chaos) from accidentally knocking the projector from its stand, which was a box. Despite the seriousness of the scene
Post a Comment
Read more
More posts