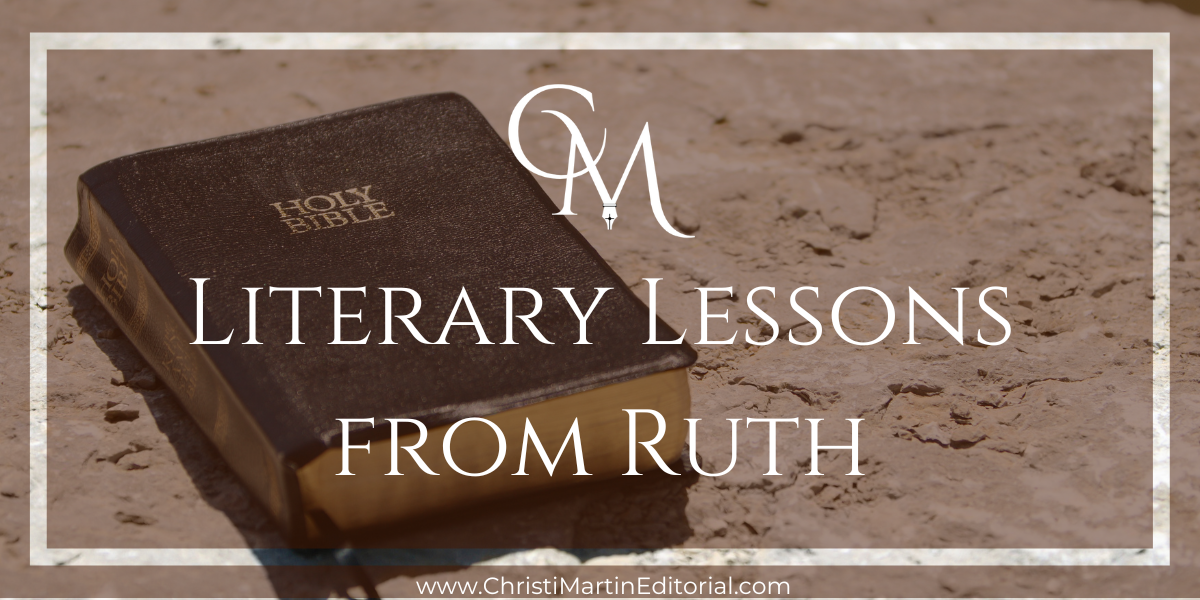 For the past few months, my Faith and Fiction Writing series has centered on establishing and framing our mind-set as Christian authors. This month, I’m going to analyze a biblical passage with a writer’s eye. I am a firm believer in the inerrancy, historicity, and sanctity of Scripture, and I normally read the Bible as a way to listen to God, understand my human fallenness and the gospel, and draw application for my own life.

Occasionally, as a writer, I love to revisit Bible passages to examine them for their literary merit. Literature is designed to reveal a worldview and show characters operating within this worldview, and I believe this way of studying the Bible can be a great additional tool to improve our writing and our understanding of biblical principles. So today we’ll be digging into the book of Ruth, an Old Testament story I find myself returning to whenever I am struggling with obedience, fear of the unknown, or self-doubt.

Ruth has a marvelous plot, full of hard decisions, family relationships, and suspense. It is structured as a romance and as a comedy (the Greek opposite of a tragedy), with an encouraging ending and a cast of both static and dynamic people. I’ve broken the book down below into a seven-point plot structure to illustrate. 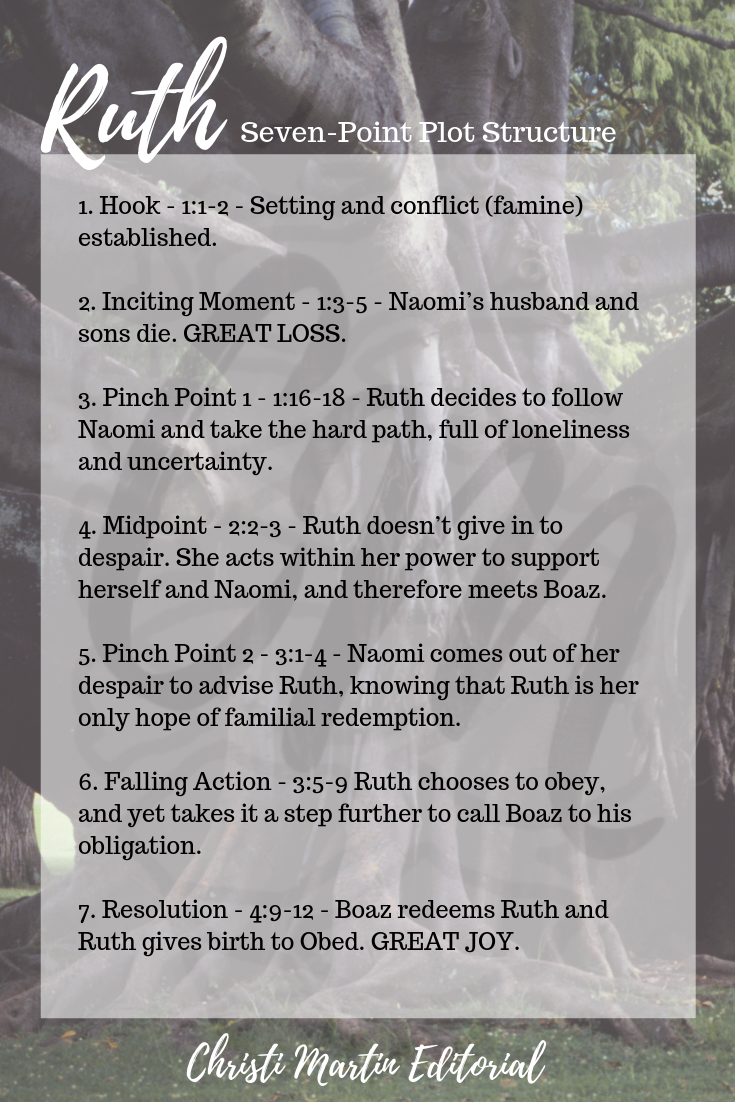 There are many moving parts in Ruth’s plot structure, and ironically, Ruth seems to be the most static character. Persevering and courageous, Ruth does what she thinks is right consistently, even though others might consider her decisions unwise or even dangerous. It exposes her unfamiliarity with Hebrew culture and points to the fact that her guiding compass is not simply self-interest. Her decision to return with Naomi established her as a faithful and honorable woman and set in motion a series of events that led to Ruth’s redemption and her place in the genealogy of Jesus. As Ruth’s foil, her sister-in-law Orpah makes the rational decision—the safe decision—and returns to her Moabite family. But throughout the narrative, Ruth’s actions frame her as an ideal woman.

Her male counterpart, Boaz, is similarly portrayed as an ideal man—mature, dutiful, strong, and kind. As a kinsman redeemer, he is also a representation of security and certainty. When he first meets Ruth, he is generous and respectful, allowing Ruth the dignity of supporting herself by gleaning in his fields. He doesn’t simply stop with this allowance, but extends over Ruth the protection of his field hands and his young women to work with. Even when Ruth approaches him at night on the threshing floor, he insists on seeking out Naomi’s other kinsman redeemer before accepting Ruth’s marriage proposal. The unnamed kinsman redeemer in story acts as Boaz’s foil, initially claiming his right to redeem Elimelech’s land and possessions, and then rescinding his redemption when he finds out Ruth is part of the bargain. Worried about his own inheritance, the unnamed redeemer declines. In faithfulness, Boaz then redeems Ruth, thereby preserving the name of Naomi and her late husband.

Unlike Boaz and Ruth, Naomi is the most dynamic, chaotic character in the story. Due to the death of her husband and sons and her age, Naomi is plagued by bitterness and uncertainty about her future. She revokes even her name (which means “pleasant”) because of her belief that God has brought calamity upon her and her family. As Ruth’s mentor, Naomi seems to be driven by emotion, first insisting that Ruth leave her and return to her own family, and later advising Ruth to (according to some commentators) seduce Boaz into redeeming her. If it weren’t for Ruth, Naomi would be entirely helpless and hopeless in a worldly sense, and Naomi knows it. Despite Naomi’s less-than-honorable intentions and her bitterness, God redeems her through the faith of her daughter-in-law and her kinsman redeemer.

The conflict in Ruth is centered around Naomi’s misfortune. When her husband and both of her sons died, she and her daughters-in-law were effectively left homeless by the societal standards and property laws of ancient Israel. Understandably bitter, Naomi returns home with the faint hope that she won’t starve. Knowing full well that hunger and death might be all that awaited them, Ruth goes with her. When they arrived, Ruth goes to work as a gleaner. Whereas Naomi is desperate and angry at God, Ruth is determined and hopeful. Her actions illustrate that she is an independent thinker, straightforward, hard-working, and loyal. Every obstacle Ruth overcomes is related to meeting her own needs and the needs of her mother-in-law. She is willing even to marry an older kinsman of Naomi’s (perhaps at the risk of her own future—since having children was the ancient woman’s retirement plan) in order to secure her mother-in-law’s inheritance.

A quiet but pervasive theme behind the story of Ruth is famine. Lack of food pushes Elimelech, Naomi, and their two sons out of Israel to sojourn in Moabite territory. Much of the story is centered on food and abundance (or the lack of it). Food then again motivates Naomi to return home after the death of her husband and sons. “Bethlehem” literally means “house of bread.” Ruth is driven to work for food, and she confronts Boaz on the threshing floor where the grain is processed. Part of Boaz’s act of redemption is purchasing a field. This extended metaphor is woven throughout the narrative and illustrates the fleeting nature of material things while also representing the changing circumstances of life that God uses for his glory.

Life and death are also used to frame the story of Ruth. While familial death is the inciting moment, the ultimate redemption is represented by Obed’s birth (and the continuation of Naomi’s family). Ruth’s story, then, is a small human snapshot that reflects the overall message of the Bible: God overcomes the sin and death introduced by Adam through the redemptive death and resurrection of Jesus.

Although Ruth and Boaz are the literary heroes of this story, Naomi is the person we as Christians relate to most. Her journey echoes ours. We were lost, bitter, and broken in a foreign land when we were told of Christ’s redemptive work. Even when we are striving after wind and looking for our own way to success, God accepts us as his children based on his redemptive act on the cross. When we came to trust in Christ, he brought us to life and is making us whole through his constant redeeming work in our lives. No longer do we have to rely on the uncertain generosity of other people for security and redemption. Through Jesus we are assured of a future and a hope, for this life and for eternity.

Ruth teaches us that doing what’s right in spite of hardship and suffering honors God. In his grace and mercy, God has enabled us to endure and prevail in love despite horrible tragedy and loss. Through Naomi’s example, we see that even in our bitterness and deep grief, we are incapable of thwarting the ultimate purposes of God. Understanding this is essential to a right relationship with our Creator.

As Christian writers, we can use our characters’ redemptive arcs, vivid imagery, and thematic elements to illustrate truth about life and about God. Ruth is a great example of the transcendence of God’s promises over and throughout human history.

Stay tuned next month for the next installment of my Faith and Fiction Writing series!
Writing 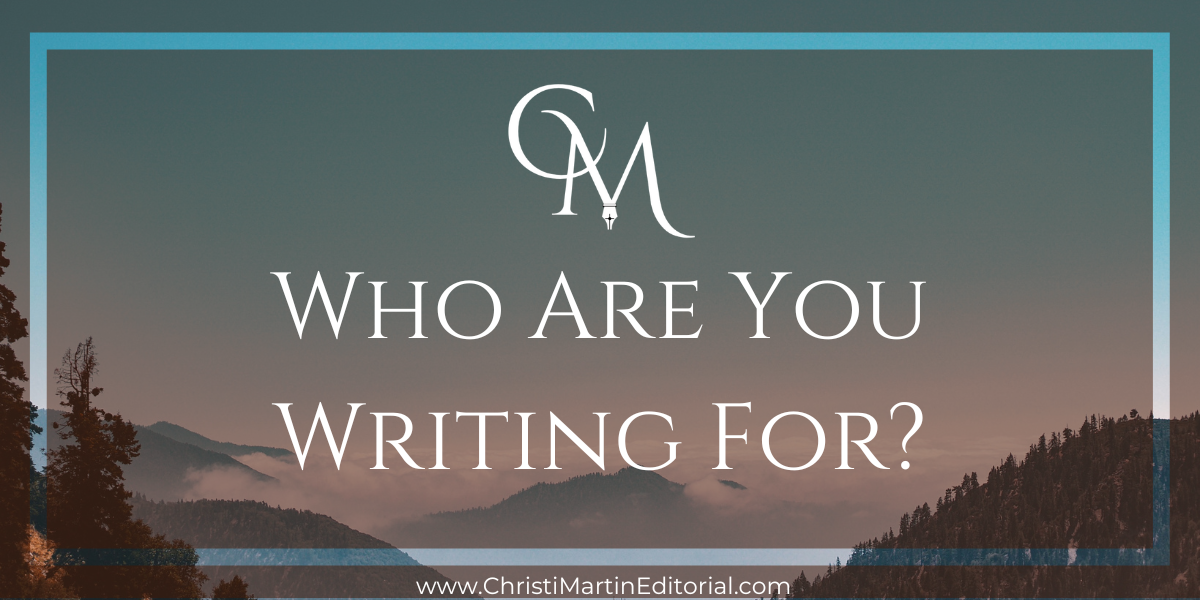 Who Are You Writing For?

In the past couple months, I’ve examined the internal part of our faith and writing through the lenses of our own writing goals and the state of our hearts in relationship with Christ. This month, we’ll take a look at the other side of the page—our relationships with our readers. For those of us who rub shoulders with the writing community, we know that we aren’t alone. Writing a book takes a village from the spark of an idea to the finished product, and established authors know that the effort does not stop there! Even if you are an author who writes only for yourself, this discussion will still benefit you because you are your reader. So how do we pursue Christ as we determine who we’re writing for? Some writers spend a lot of time, energy, and resources to identify and understand their readers. What do our readers want? How can we reach our target audience? As Christian writers, we have an even greater responsibility to select our target readers carefully. If our desire is 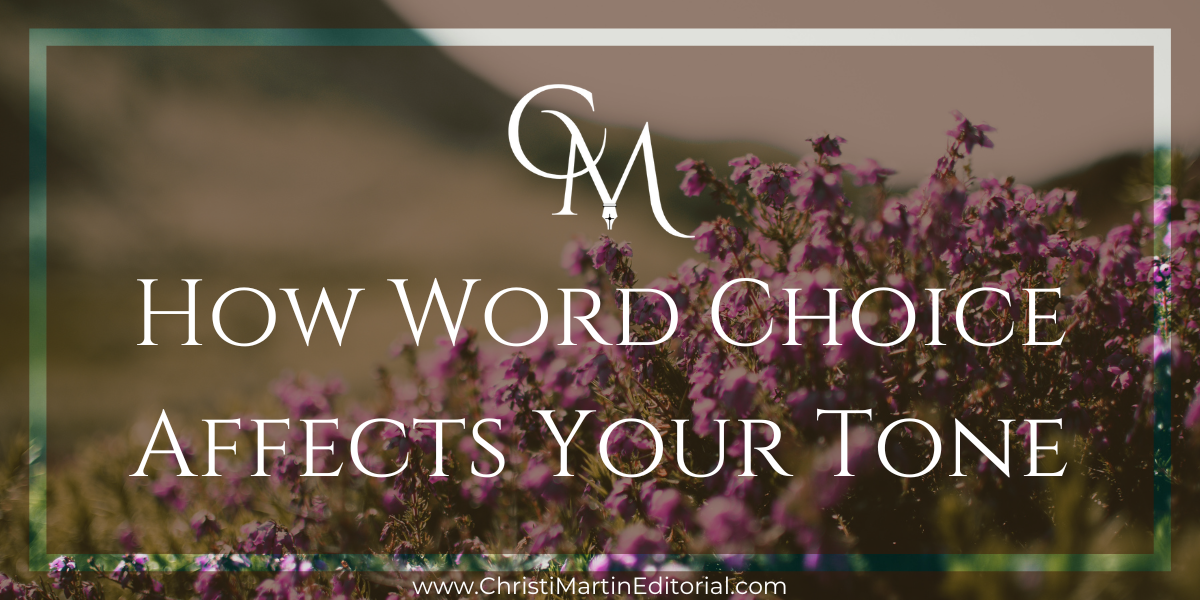 How Word Choice Affects Your Tone

Words build up. Words destroy. The life-bringing and death-delivering power of words is highlighted throughout the Bible. The proof of it is punctuated in our lives by every flash of anxiety that precludes a tough conversation or desperate wish that we could obliviate something we wrote or said. If our spoken words have such power, then our written words could very well echo into eternity, and an appropriate amount of diligence should always be exercised when choosing them. In this blog post, I will walk through the basic elements of word choice and a few tips to avoid common pitfalls and help us choose our words wisely. Elements of Word Choice Nouns and verbs. Nouns and verbs are the marrow of your writing. Done well, they look innocuous but provide crucial emotional depth. When weak, the rest of your writing lacks essential oxygen and life. Before you look at your adjectives and adverbs, examine your nouns and verbs and ask yourself these questions. 1. Are they specific? D 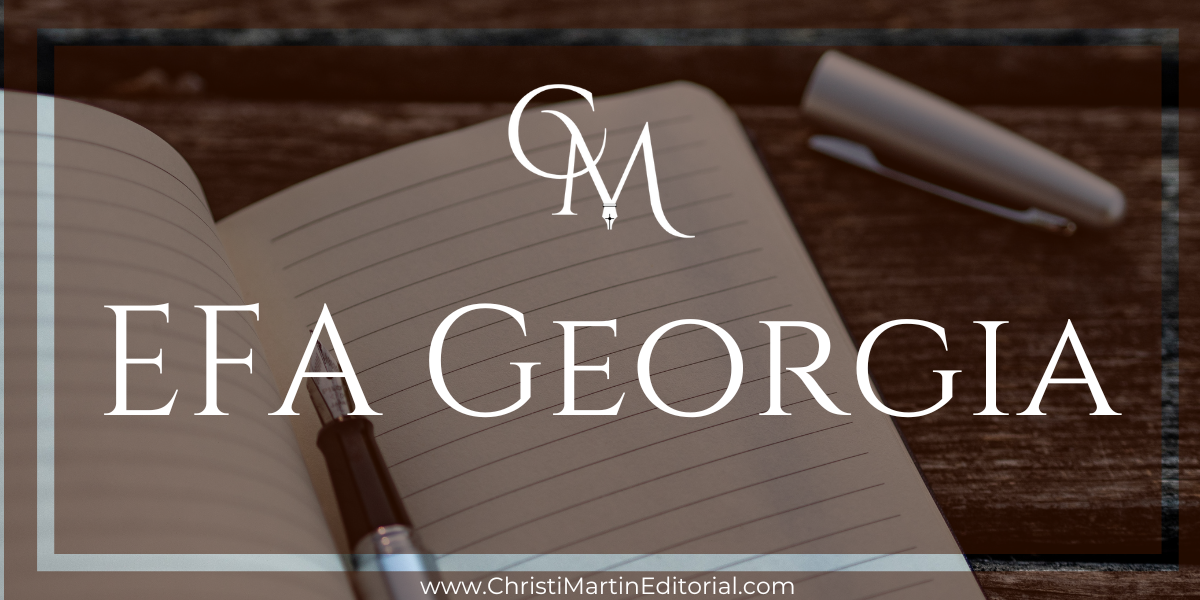 In the middle of 2018, I moved across the country. My husband and I traveled far away from family, friends, and the familiar places and faces we had always known. Nearly nine hundred miles from those roots, I knew I wouldn ’ t thrive if I didn ’ t put down new ones. As we settled into our new town, I did just that, searching for water to nourish my transplanted editing career and displaced social circles. I longed for the community and support I had left, and, ever practical, decided I would begin seeking professional relationships I had left behind with the North Texas chapter of the Editorial Freelancers Association . Almost entirely a volunteer organization, the EFA provides innumerable tangible and intangible benefits to its members. The publishing industry has changed so much from what it once was, and there is a huge freelancer population just doing what we can to educate ourselves, excel in our fields, and help authors and presses, all while trying to make a living to suppo